Podcast: The shocking stuff that shows up in our garbage 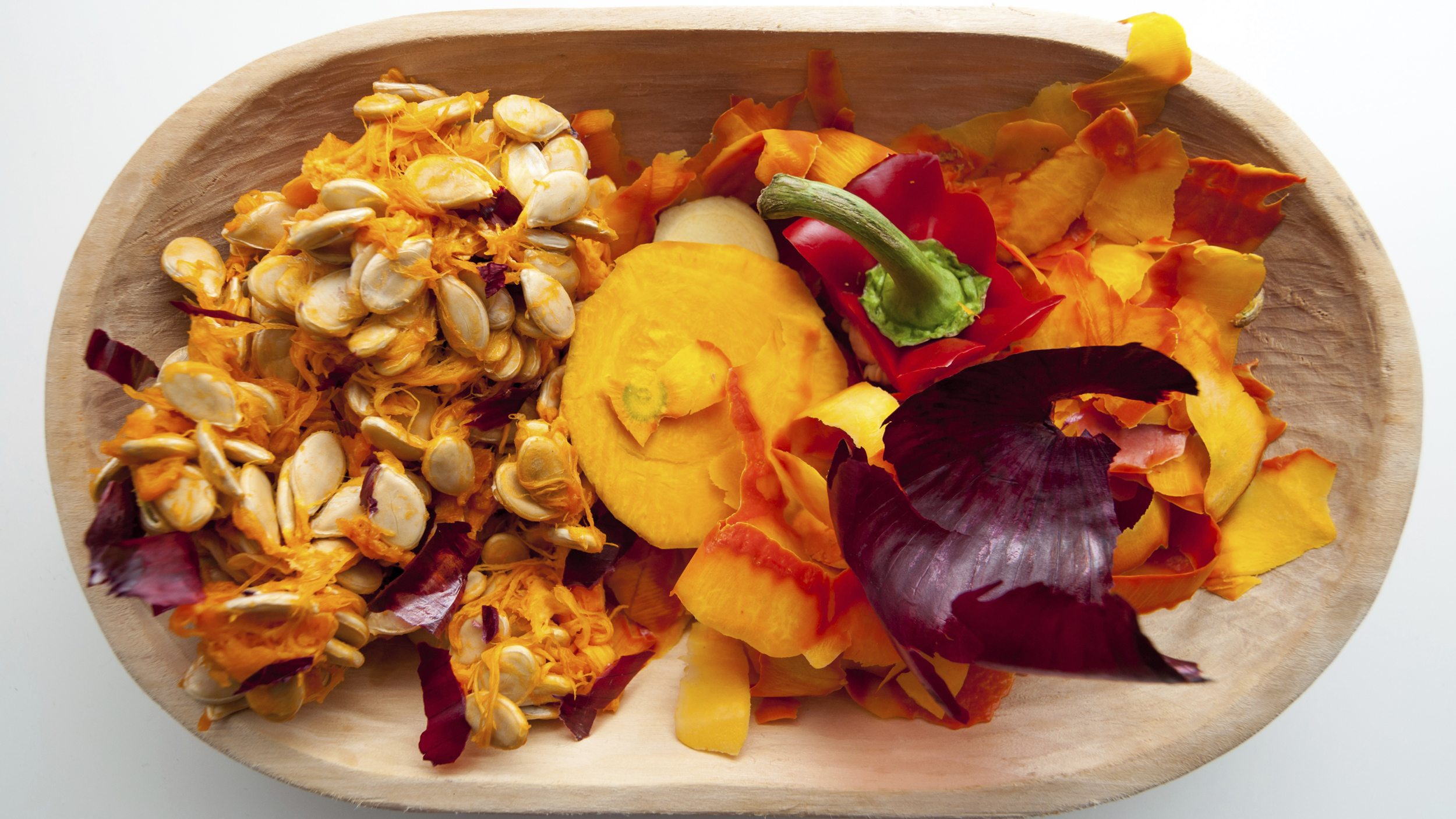 Did you know forty percent of household food ends up in the trash?

Food waste is a $31B problem in Canada alone. That’s like everyone in the country throwing $760 a year in the trash. And the worst part? Most of the household food waste is edible, good stuff.

You’re listening to University of Guelph’s Food Institute podcast — the hub for exciting and innovative food research across all fields of study.

I’m your host Catherine Jheon. Each episode we’ll put the spotlight on one fascinating field of food research and the people behind it.

This episode is all about food waste.

Most of us don’t think about food waste until it’s time to put the green bin out on the curb. Usually spurred by the sound of garbage trucks roaring down the street.

The city workers empty the bins and our waste is trucked away. Out of sight, out of mind.

But not for Kate Parizeau, when she’s not actually rummaging through other people’s trash, she’s thinking about it.

I’m here at the University of Guelph chat with her about her research.

My name is Kate Parizeau and I study food waste.

Inside her tidy office, I’m not kidding when I say Professor Parizeau’s eyes lit up a little when she talks about garbage.

Garbage is something I’ve been very interested in for a long time. When I was a kid we lived very close to a landfill and experienced. I had a very visceral experience of what was going on there. Every now and then we would get the smells, we would see the waste coming out of that landfill and for me as a student I was an activist around waste and waste management issues when I was an undergrad student so it’s something I just became more and more interested in. And I realized it’s was an intellectual interest There are so many social and cultural and environmental values embedded in our waste. If we paid a little attention we can learn so much about our society.

In the pursuit of learning, Professor Parizeau and her colleagues — Mike Von Massow and Ralph Martin — along with a small team of dedicated grad students have spent last two summers picking up, rummaging through and meticulously categorizing other people’s trash.

A typical day doing waste audit would involve our students waking up really early, usually around 5:30 – 6 to get out before the garbage trucks to start collecting all of the waste they would find on curbside on garbage day. They’d pick up the garbage bag, they’d pick up the recycling bags, they’d pick up the organic bag and because Guelph is now on a bin system it would be heavy duty work for some of them. They’d have to be tipping these bins into bags so it could be a little bit messy and a little bit arduous and they would sometimes get questions from residents who’d ask hey what are you doing.

A Guelph city worker was on site to explain to confused residents that it was for research.

So all of these bags would get loaded to a trailer attached to the back of a big city truck and it would get driven over to the waste management facility where we’d have a team of auditors waiting including myself and my colleagues waiting with our hardhats. Our clear glasses and our heavy duty gloves, and our steel toed boots and we would unload all these bags then there would be a little bit of negotiating between the group of us who was gonna do garbage, who was gonna do food waste, it’s interesting because all of us tend to have their preferences.

I was surprised to find many prefer to audit garbage over food waste.

Part of why so many of us think garbage is gross is because food has been mixed in with it. It smells like it’s rotting because there’s food in there. So when the food is separated out the garbage can be pretty mundane actually a lot of it is plastic. So it’s not so bad all the time. Poopy diapers are pretty bad but not everyone has poopy diapers in the garbage.

You need a sense of humour for starters. Going through poopy diapers and used sanitary pads along with food waste requires some serious dedication.

When we bring grad students into our team, I mean there really is a personality fit that has to be there. People have to be passionate about this and they have to have a certain tolerance for dealing with some of these issues. These are the kinds questions we ask in the interview like have you spend time with waste before, how do you feel about it and important right because if people are going to be gagging all the time, they can’t do the work properly. It’s already a self selected group of people. We don’t get hundreds of applications for these kinds of jobs but when we get three or four they are the right people so we’ve been really lucky to find people who are weird about garbage in the same way (laughs).

Being weird about garbage translates to a group of four to six people meticulously weighing, measuring, counting, and photographing food waste for up to six hours a day. All inside a hot and humid waste management facility. When that’s done then it’s time to call it a day.

And you get into the car, go home get cleaned up. I have a small collection of auditing clothes and so I usually have two three days of clothes before they need to be washed.

After studying 50 households, sorting through up to twenty bags a day, Professor Parizeau and her team found some surprising stuff.

For me what was most shocking was finding really clearly edible food, we found whole bunch of eggs that looked like they came from someone’s backyard chicken they would have the litter from the chicken bedding but also the eggs so there were all kinds of stuff that we would think this is usable, edible, something people could have done something with.

Some of the best before date we would see yogurt or hummus being thrown out and we could clearly see the labels when the container was thrown out with it. We’d see this in the recycling stream. People would just throw the whole tub in there… you’re not supposed to do that please don’t do that. At the very least please separate them but also please don’t waste food that hasn’t gone bad yet.

So why do we waste so much food?

I think in part that food is relatively inexpensive and we have a convenience mentality so there’s this sense of abundance. I don’t think we value food as much as we should economically and socially so I think we need to make a real shift to see it that food as resources to see it as something someone else would be happy to eat. To see it as potential greenhouse gas emissions if we don’t use it and eat it.

Because all that adds up to about $31 billion in food being wasted each year in Canada alone. That works out to about $760 per person a year. Forty percent of household food ends up in the trash. Those numbers are so staggering it’s easy to feel down in the dumps.

There are so many days I’m like what am I doing, why am I doing this usually because we’re finding huge amount of preventable waste and that can be so depressing so I try to think this is why we’re doing it, this is exactly why because there’s no reason for this amount of waste to be happening I think we can do something about it.

We shouldn’t get depressed because these things change over time so we can think back to world war two when had really different ethics behind food and we wouldn’t waste it. We had different cultural norms, we had different skills. And the world changed and our behaviours changed and so it’s possible to change back. Education is a big part of it, creating systems, creating policies and incentives that really encourage people to do the best thing with their food.

Thinking across the hierarchy of waste so saying even if this food isn’t edible we can capture the nutrients and some of the energy in it. Being innovative and thinking outside the box a little bit more. There are lots of ways this can get better so while it’s depressing that the situation is bad, it means there’s so much we can do to improve it.

Not surprisingly professor Parizeau and her team will be back sorting garbage this summer.

We’d love to continue to collect data part of where we go next is to understand diverse households and see what’s happening for example in multi residential units and apartments are a really different situation. We are also starting to work upstream so we’re starting to do more consultations and interviews with people who work in retailer, who are farmers and who work at processing factories to understand what some of their limitations are in preventing food waste upstream and thinking about how those decisions impact what happens at the household level. Things like best before dates, packaging sizes. So this is part of where our work is going starting to think more big picture.

So you’re not done with garbage. You’re OK to go back for some more? Oh yeah I’m definitely going back for more. There still so much left to learn.

That was University of Guelph Professor Kate Parizeau. She studies food waste.

The Food Institute podcast was edited by Ashley Walter and written, produced and hosted by me, Catherine Jheon. Thanks for listening.