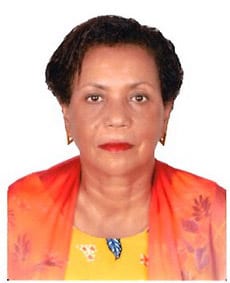 Maria Andrade is a Principal Scientist of the International Potato Center, a co-recipient of the 2016 World Food Prize, with 30 years of working experience in Africa.  She has released 30 bio-fortified sweetpotato varieties of which 20 are drought tolerant. Over the last 15-20 years, crop research and the development of the seed systems as resulted in the increase of the yield, from about 5-6 tons per hectare in 2003 to almost 14 tons in    2016 (FAOSTAT, 2016) and 23% of all sweetpotato grown in Mozambique is bio fortified. She served as Vice‐President of the International Society for Tropical Root Crops, in charge of fund raising (2012–2016), member of the board of Directors of Alliance for Green Revolution in Africa (2012 to 2019),  member of External Panel review of Next Generation Cassava, (2018 to present), Representative for the CGIAR Centers on Platform for Innovation of Agriculture and Technology Transfer in Mozambique (2009–2016),  Member, Group of Champions for the Food Forever Initiative (2016 to present).  Key recognitions for her sweetpotato breeding work : 2017 Appreciation Award. ISTRC—Africa Branch, 2016 Outstanding Alumnus Award. NCSU, USA, 2017 Swaminathan Award for Environmental Protection, India, 2018, 5th Wonder Women of Agriculture by USDA, 2018 Woman of the Year: Cabo Verde, 2019 award by Next Einstein Project of Africa Science Week, 2019 award in Science and technology at Gala Cabo Verde Sucesso in Senegal.